Character Creation for Necromunda Underhive Wars allows players to fully customize their character. In creating your character, you will be given the opportunity to choose your Gang and a basic class, of your character and selecting a variety of hairstyles, hair color, tattoos, and many more. This page covers information regarding character creation.

NOTE: Necromunda Underhive Wars recommends players to play and complete the story campaign first to better understand the game's mechanics and systems as a whole. However, if you prefer to create your own gang, you could go ahead and do so. Just be reminded that creating your own gang will only apply to the separate mode of taking on Operations, Skirmish, and completing Missions - basically, your customized gang can't be used in the story campaign mode.

The first thing you'll have to select is the house of your Gang which determines the physicality and distinct look of your crew, but more importantly, the stats and house bonuses it comes with. There are three houses you can choose from which are:

When you're building your character or the Fighter for your gang, one of the primary components you'll need to keep an eye out for is increasing the basic Stats. EXP that is acquired from leveling up is used to increase the level of each stat. You'll start off by spending 10 EXP per stat and then the cost gradually increases.

Focuses on how good your Fighter can evade Ranged and Melee attacks. Agility affects Ranged Evasion and Melee Evasion.

Strength determines how strong you can penetrate armor (Melee Weapons) and the effectiveness of stunning the enemy. Strength affects Melee Penetration and Bypass Melee Stun Resistance.

Alertness conditions the order in which units will act during a turn in battle and the chance of receiving graze hits when struck. Alertness affects Initiative and Hit Resistance.

Shapes the effectiveness of using Ranged Weapons in combat, such as reducing graze hits and target evasion. It affects your character Ranged Precision/Hit Chance and Bypass Ranged Evasion.

Before you start with creating or hiring members of your squad, the first thing you'll need is to create a leader. So what is a leader in Necromunda Underhive Wars? The leader is a special character of the gang who is capable of accessing multiple squad-based buffs and unique Skills that can only be acquired by the Leader. Each gang that you have created in the game will require you to have one leader. By spending EXP, you can increase the Leader Rank to obtain even better buffs and bonuses - apart from that, Fighters that reach Rank V can also be promoted to being a leader.

The dreadful conditions inflicted on Necromunda's population impel many of the planet's denizens to flee downhive, risking it all in the hope of joining one of the countless gangs who rule the hive cities' lower levels through sheer violence and strength of numbers.

Juves who outlive their first trial period are often given growing responsibilities within the Gangs - ever more dangerous assignments designed to cull the weak while testing the resolve and loyalty of those who remain.

Climbing through any Gang's ranks is a long and perilous process. Before being accepted as fully-fledged Gangers, experienced Juves are required to continuously keep proving their worth and to never turn away from a fight - no matter the risks.

Those who are fortunate enough to survive their first years of Underhive life will eventually attain Veteran status within the Gang, earning the respect of their fellow Gangers, and the deference of would-be prospects.

Even among long-serving Gang members, some distinctions are reserved only to the most hardened and battle-scarred Fighters - Gangers who have proven their battlefield might over the course of multiple engagements and triumphed against insurmountable odds.

Out of the countless poor souls who choose a life of violence in the Underhivem only a select few will survive long enough to become known as apex Champions, exalted by their fellow Gang members and feared by enemies from rival Houses.

Some Fighters possess the ability to inspire and rally others through the bloody maelstrom of battle. Of these, only the most cunning, ruthless, and lucky ones will rise to become Leaders - an instrumental and extremely high-risk position at the very top of the Gang's hierarchy.

Now, when you select a Career or a Class, you'll only need to focus on a few stats depending on the career you've chosen. So say, for example, if you've chosen the Heavy career, you'll primarily be focusing on Melee Prowess instead of Ranged Aptitude since the Heavy career excels in punishing their foes with Melee Weapons in close-quarter combat. The Deadeye class, on the other hand, is your Sniper or Ranged class which is strong at poking enemies from long-range.

The Deadeye is your long-range, sniper expertise class. This class can be deadly from afar if players focus on increasing its accuracy, intelligence, and ranged aptitude.

The Heavy class is your go-to career if you are after causing destruction to the battlefield and fire support to your allies. They are capable of wielding Heavy Weapons but are restricted to a few traits in the game.

Lay-Mechanics are considered both support and builder roles in the game. They are capable of repairing health dispensers and zip lines which are a lifesaver if ever you are stuck in a sticky situation. If you prefer to have control over the battlefield, then the Lay-Mechanic is recommended for you.

Similar to Lay-Mechanics, this career is also a support role that is capable of taking the battlefield into their hands. Saboteurs specialize in creating and setting up traps and obstacles that can be quite troublesome for both foes and allies.

If you're the type of player who is a Melee-focused fighter, then the Brawler is the career for you. It is quite difficult to try to get in and up-close and personal against the enemies encountered in the game. But with the right amount of stats that are leveled up, Brawlers are capable of transforming into an unstoppable force.

All that's left of course is to personally change the look of your character and by selecting a list of cosmetics for your fighters. These are all just for cosmetic use only, and it does not provide any other bonuses, effects, etc. In Necromunda Underhive Wars, you can individually customize each fighters' appearance, or you can choose to change the look of  your complete Gang. You can even fully customize one fighter and then apply the chosen appearance to the rest of your Gang or keep each of the fighers unique.

Allows you to change fighters' Skin Color, Tattoos, and Straps 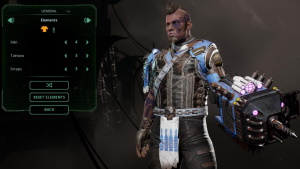 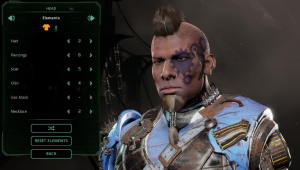 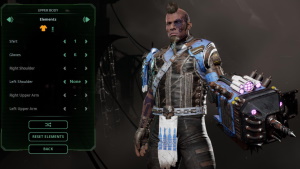 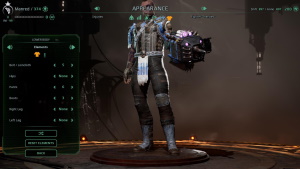